I was trying to not make this a thing, but when friends who work at your favorite coffee shop are even getting concerned and ask questions… Yes, I realize that 147 mostly Christian students were killed in Kenya yesterday. Yes, it breaks my heart. Yes, I am concerned, it will make travel more difficult, and yes I’m still going. No, the shooting is not that close to where I’ll be.

When you know you can help others in a way few are in a position to follow, there’s a sense of responsibility to go. I’ve heard many war photographers say the same even after near death experiences. That’s another level but the principle is the same. The camera is really incidental, though it is my contribution to go do work that can help others. If I were a farmer, I’d be doing a different kind of work to give back. 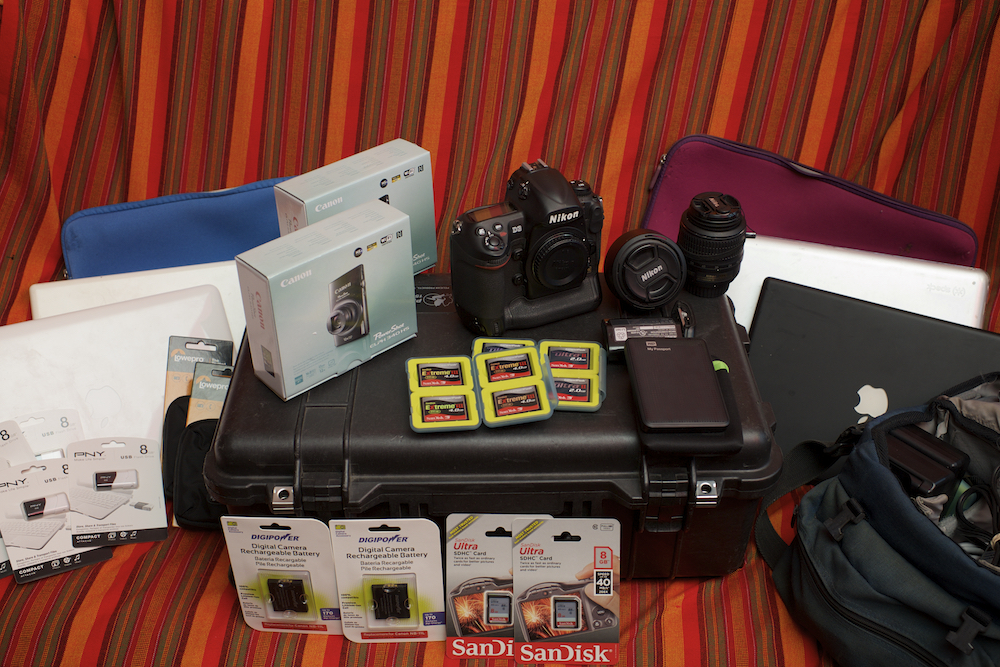 Some of the many contributions you’ve provided for the photography program with Rafiki Africa Foundation’s school in Kenya.

When I started photographing full time, much of the reason was because I wanted to be able to use my work to help others without needing to ask permission from a boss or use vacation time. The goal, and it’s worked (ish) so far, was to use the day to day work from the business to support international and domestic photojournalism for advocacy. It’s been far more difficult than I ever imagined, especially in a watered down market. But I feel I’ve been given a gift, and while it is mine to grow and nurture, it is a gift none the less. I feel it would be selfish for me to not use that for good, and I have the liberty to make that choice. That principle is remains foundational as to why I am building JBP.

I generally knew it would be beyond difficult and paradoxically rewarding, both going on this trip and starting out on my own. But it also put the tools in my hand, as well as the time and flexibility, to use what I have regularly to intentionally to help people. It’s not about money, though that’s an important tool. It’s not about doing something that looks glamorous. The resources invested to do this type of work locally and beyond greatly outweighs the apparent (false) romanticism of going somewhere far away.

Many people have reached out in support to us as we start a photography program in with Rafiki Africa’s LightHouse Academy in Kenya. I never expect anyone to step up but many have, contributing computers to cameras, books to memory cards, funds for classroom supplies, a lot has come in. There are a few people in my life that I have known who have always been there in support, and one of whom was Daniel Mast. He was absolutely unfailing in that regard, it wasn’t even a question for him. He knew what it took. He always gave where he could. I haven’t talked about it much online but there’s still not a day that goes by when I don’t think of him. And it’s not really easier, just less crippling. Every hard day with a camera, or not, I still wish I could talk with him. He was dedicated to his family, but if he could, he’d be out here doing the same thing.

When Daniel passed away two years ago next month, a big question remained as to how to continue his legacy. In raising donations for the school program his wife, Rebecca Mast, called me without having settled on anything. As she talked, she decided one of the best ways to honor his legacy is to send one of his cameras along to Kenya to help build the program. I initially protested but soon realized it wasn’t up to me, though it also has to be challenging for her in ways I can’t understand. His camera alone will be like having a super car in a village that needs a moped, but it lays an incredible foundation for this program to grow, for these students to have a real shot. I am humbled that I get to carry his personal camera to an area where so many have never even held a phone. It won’t hit me until we’re there, until I see a student using it hopefully one day to report on issues in Kenya as a photojournalist. That camera earned a living for the Mast family, and now it can continue that now in a place with very few options for work. He is still making a difference. The need is still there. Evil will always continue, so must we to fight it incessantly with transparency and love.

I leave for Kenya on Sunday. Today is Friday, April 3rd. To all those who have contributed to this ambitious but amazing journey, I can’t thank you enough and look forward to bringing back stories of how those contributions have planted a seed in Kenya. Thank you.