One of the most personal aspects of starting the photography program has been the involvement of Daniel Mast and his wife Rebecca. May 21st, 2015, unbelievably marks two years since his passing, and the Masts are foundational in helping this program succeed in overcoming many early challenges. His fingerprints are all over this project, down to the green Toyota Land Cruiser that drove us around Kenya. Daniel had a nearly identical vehicle, a 1972 Toyota Land Cruiser FJ40, that he restored and loved to take off road with Rebecca.

Daniel​ was always the first one I’d talk to about all things photography and often times, just life. Whether it was a tough day on the job, one of us learned something cool, if there was a new Nikon or Apple update, without a doubt we were talking about it. He cared about the integrity of the craft of photography, something I’ve struggled with a lot and especially since his passing.

The hardest days I’ve had with a camera were either in his absence or photographing challenging subjects in Kenya or India like poverty, leprosy, family loss, and they’ve all come after his passing, when I know he’d be there to push me forward because he was strong enough to. I’ve found a new level of empathy and solidarity with those who have lost a close one, but I’d give it back to not have to miss him. People mention him to me at a job when I’m in the middle of photographing or packing up, and it still catches me off guard. Some know we were close, others wonder if we knew each other.

I didn’t want to spill my guts on the blog and take away from Rebecca Mast​’s words, but I find myself with a lot to say and even more on my mind today. It was a sunny day when he died, and by the way I found out, I came to understand he was just injured quite seriously, which wasn’t the case. Zack B Arias​ called me and I thought it was about another project, but even he heard about Daniel’s passing and realized we were friends.

There have been many hard days when I miss his friendship, and because everything we did was so similar, our approach, cameras, equipment, I’m reminded of him in everything I do. That’s one of his many gifts to me. I know I’m not alone in saying this, but I have felt very alone on my very atypical path since his passing. For the first year at least, I could just barely make it through a shoot without breaking down. It took all I had to keep my composure and then it hit me like a ton of bricks. Some of you saw it and were there to help me through it. Working alone has felt so empty.

For me, this photography project in Kenya is the most significant thing I have participated in in my 30 years, and it is both exciting and naively ambitious. It feels very new in a world where few ideas are truly new. There is no one I’d rather have to help build the photography side of it than Daniel, and thanks in large part to Rebecca, that is still possible. It was remarkably difficult to leave his camera there in Alendu, Kenya, not because it didn’t belong there, but because personally it felt like another step forward, a means of letting go of something literal, something I’ve felt the need to protect. But in reality, it’s a new chapter of his legacy, and it is bringing hope realized in Africa.

“Leaving a Legacy: It is coming up on two years without Daniel’s presence and love in our lives. The ache and grief of his absence is so different from those first few months, but the loss is no less.

These past few weeks I have found purpose and direction in regards to how to continue Dan’s dreams and goals when he set out to become a photographer. I had been struggling with what to do with his photography equipment. It’s never felt right to sell it and I’ve always intended to keep and use some of it – both for the kids down the road and for my own memories of learning that skill beside him – but I have no intention of becoming a wedding photographer and not really any intention of using this equipment for income. So the volume of stuff has haunted me – I don’t need it but I don’t know what I’m supposed to do with it. Jordan had shared with me his plans for the trip to Kenya; but it took me weeks before I actually looked at the blog post and was struck with certainty that I needed to respond. I called him – not really sure of what I was going to do. During the course of the conversation I suddenly had incredible clarity and peace. Dan would have been going with him if he was alive and able to do so. I’m sending a camera, and anything else I can convince Jordan to take with him.

This was Dan’s mission, his dream, his passion – for his work to be more than just putting food on the table and a roof over our heads (though that was important and valuable). He wanted to be successful with photography in a way that enabled him to give back – to use his gifts to tell a story that mattered – to bring hope and light into darkness. We never reached that point while he was here – but I can send what I have, what he left behind, in his stead.

Jordan’s story is in a link in the comments. Follow him with prayer and encouragement. He’s carrying a piece of our dreams and a fulfillment of a purpose and mission that was cut way too short.” 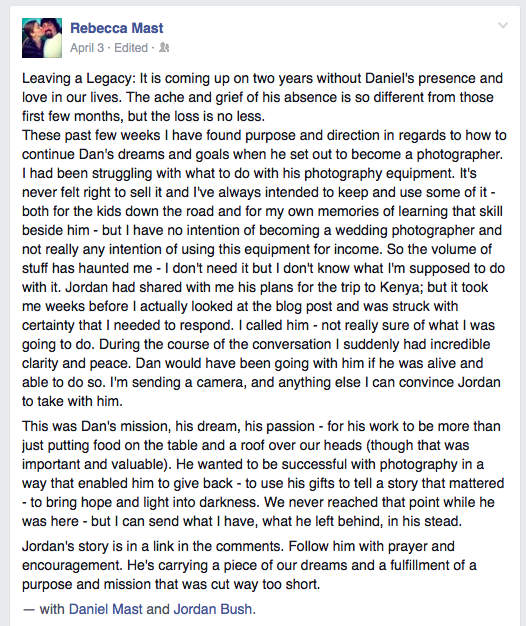