With a Heart of Gold – Lolo Jones

For those who are unaware, I lived in Baton Rouge, Louisiana for about a year after the Deepwater Horizon Oil Spill, which I of course photographed. I had a lot of reasons for the transition: social, professional, and primarily a few photography projects I wanted to see through. The entire experience was a sequential, almost coordinated path of destruction and failure. But out of it, some really awesome events have transpired.

I was working on a personal project covering LSU’s track team and it never quite took off, mostly because my job photographing at The Advocate went under after a budget cut and I moved back to Pennsylvania. The 2011 LSU Alumni Gold meet took place on April 23, 2011, and wouldn’t you know it, Lolo Jones showed up. Of course she showed up, she’s Lolo Jones. I had never met her, nor did I know she was competing that day, but I knew who she was right away by how she carried herself. Her fitness level was leaps and bounds (ha!) greater than anyone else at there at LSU, which is the leading collegiate producer of Olympic track & field athletes in the United States. That’s saying something, folks. 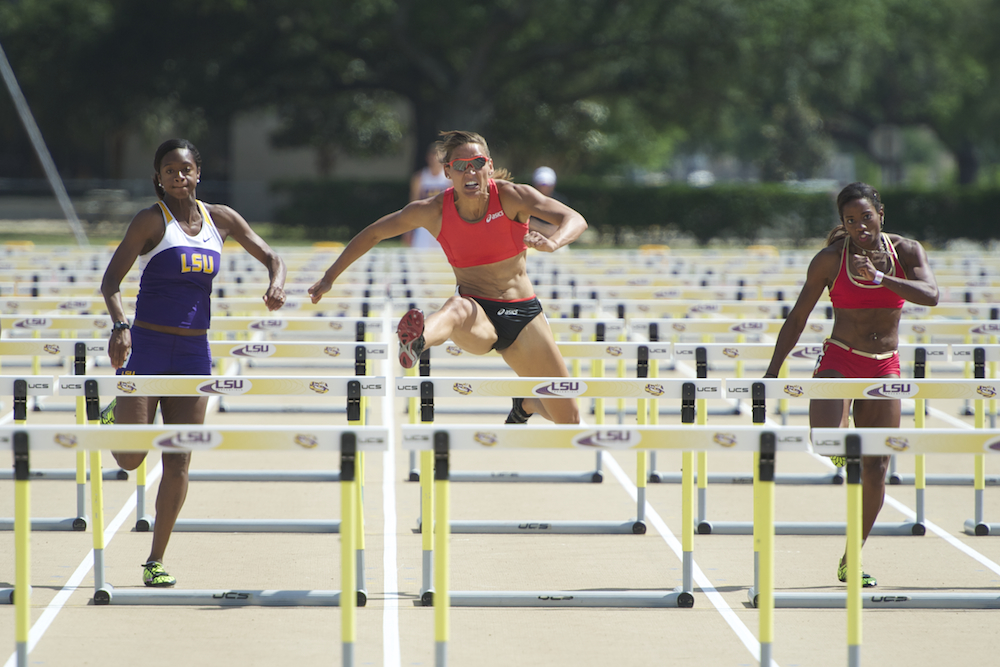 In one way or another, I have had the privilege to photograph a lot of world class athletes in competition over the years. Fine, I’m only 27 years old and it hasn’t been a ridiculous Peter Read Miller or Walter Iooss career just yet. But that list includes Lance Armstrong, Floyd Landis, Mike Vick, Donovan McNabb, Levi Leipheimer, the Philadelphia Phillies, and basically every professional cyclist on the circuit since 2008. And of that group, Lolo has more heart than any of them. She competes with an intensity and drive that I’ve never seen anywhere. Sure, Lance had to basically rebound from the clutches of death, but after he got healthy, his career has been impossibly fortunate in ways beyond his control. Lance was calculated, but Lolo has a fire within her soul like no other. I have to be somewhat balanced, especially because I’m photographing Lance again next week. Love you Lance!

If you want to narrowly define success by a singular event, say, oh, the Olympics, Lolo deserves unthinkable sympathy. Her experiences are more frustrating than I ever want to comprehend or even know. It is more awful than I can express in any amount of words. In far less, seemingly glamorous ways, I know what it is to miss accomplishing a central dream after putting everything into it. And while I want to get to an Olympics for an entirely different purpose, that isn’t how I define success. Eternal success, however, is something far greater, and Lolo has it. And I don’t believe she wants a drop of sympathy. I know she isn’t in this for money or fame… you simply cannot buy what she has; one has to earn it.

What makes an athlete stand out, what brings them to the forefront of accomplishment, is the obstacles before him or her. In Lolo’s case, they are still coming. She has literal and figurative obstacles in front of her journey, and has been relentless in her pursuit to turn them into opportunities for growth and inspiration. She finished a race with a result separated by the blink of an eye, a race most wouldn’t have even thought to pursue, let alone given Beijing. And if you want to split hairs, Lolo is the fourth fastest woman alive. What’s far more incredible is that millions across the globe have been inspired by her journey, and it is long from over. That’s what I call real #success.

I grabbed a few images of Lolo passively that day at LSU’s Bernie Moore Stadium. After that event, I wanted to ask to visually follow her on her journey over the next 18 months to really tell her story. But I didn’t even have the guts. And that’s my point here. How many people lay down and die in the face of adversity, overthink the possible and make it seem impossible? Or maybe something is impossible, but does that mean we shouldn’t try? How many people don’t have the courage that Lolo does to step up her game, sacrifice everything, stand up for what’s on her heart, and truly go after it? That’s what makes Lolo, Lolo. Her drive has made me reevaluate what I pursue, and how much heart I must have in those endeavors. There will always be haters, but not one of them matters. What good is hate? There’s a lot to learn here in this situation, for all of us.

So Lolo, whatever you decide to do next, please know that you have faithfully accomplished far more than any of us will ever come to know. There is, after all, a heavy piece of gold that you carry; not on a ribbon, but in your heart.